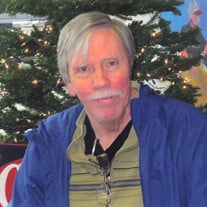 Alan F. Lacy, Ph.D, 76, of Summerville, husband of Patricia A. Murray, was born into eternal life on Friday, January 14, 2022 at Summerville Medical Center, surrounded by family. Alan was born on January 29, 1945 in Bastrop, TX, son of the late Curtis R. and Margaret (Hogan) Lacy. Alan was known to his family as an academic, intelligent yet always learning, funny, but with a dry wit. Alan loved family. He was always involved in his children’s and grandchildren’s lives as much as possible. He remained close with his siblings and will be remembered fondly as a generous and loving husband, father, grandfather, and sibling. Alan received a Ph.D. from Cornell University and devoted his career to teaching. He retired in 2011 after a long and successful career as a German Professor at Marquette University in Milwaukee, WI where he also served as the Chair of the Foreign Languages Department. Even after retirement, he maintained a strong fondness for the German program at the University. Dr. Lacy was a brilliant linguist, speaking numerous languages; he was gifted with computers often writing programs, including writing computer games for his children. Alan enjoyed travelling, both leading student groups in the German summer program during his career and for leisure with his family throughout his life. Survivors in addition to his wife Patricia are: two children, Jennifer (Bryon) Burbage of Charleston and Geoffrey (Callie) Lacy of Green Bay, WI; five grandchildren, Lindsay Burbage, Lacy Burbage, Leah Burbage, Wyatt Lacy and Shannon Lacy; four stepchildren, Shawn (Theresa) Alpert of Leander, TX, Shannon (Lynn) Alpert of Wappingers Falls, NY, Lien (Robert) Moorehead of Billerica, MA, and Kay Alpert of Arlington, VA; step grandchildren, Michael Alpert, DeAnna Alpert, Katrina Alpert, Erin Alpert, Sarah Alpert, and Paul Gauthier; siblings, Katherine (Lee) Turrell and Curtis R. (Virginia) Lacy, III; brother-in-law, Leo Cornelius; and many loved nieces and nephews. In addition to his parents, he was predeceased by his infant daughter, Jeannine Marie, and by his sister, Mary Ellen Cornelius. A gathering of family and friends will be held on Thursday January 20, 2022 from 6 o’clock to 8 o’clock at James A. Dyal Funeral Home. A Mass of Christian Burial will be held on Friday, January 21, 2022 at 1 o’clock at St. John the Beloved Catholic Church, 28 Sumter Ave., Summerville, SC 29483. Rite of Committal with Final Commendation will follow at Mepkin Abbey, 1098 Mepkin Abbey Rd., Moncks Corner, SC 29461. In lieu of flowers, the family asks that donations be made to Marquette University German Excellence Fund to support the German program that Alan cared so much about. A memorial message may be written to the family by visiting our website at www.jamesadyal.com. ARRANGEMENTS BY JAMES A. DYAL FUNERAL HOME, 303 SOUTH MAIN STREET, SUMMERVILLE, SC 29483 (843)873-4040. To send flowers or a memorial gift to the family of Dr. Alan F. Lacy please visit our Sympathy Store.

Alan F. Lacy, Ph.D, 76, of Summerville, husband of Patricia A. Murray, was born into eternal life on Friday, January 14, 2022 at Summerville Medical Center, surrounded by family. Alan was born on January 29, 1945 in Bastrop, TX, son of the... View Obituary & Service Information

The family of Dr. Alan F. Lacy created this Life Tributes page to make it easy to share your memories.

Send flowers to the Lacy family.