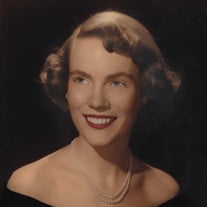 Billie Hill Rodgers, 85, of Ravenel, wife of James R. Rodgers, passed away on Wednesday, December 2, 2020 at Life Care Center of Charleston. Family and friends are invited to attend her visitation on Friday, December 4, 2020 from 6 o&#8217;clock... View Obituary & Service Information

The family of Billie Hill Rodgers created this Life Tributes page to make it easy to share your memories.

Send flowers to the Rodgers family.