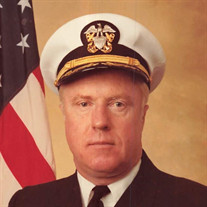 Captain Richard J. Fromholtz USN, Ret. passed away the morning of January 22, 2022, in Summerville, SC. He was born on September 21, 1937, in Massillon, OH. He was the only child of John L. Fromholtz and Irene M.Fromholtz. He was a graduate of John Carroll University where he earned a B.S. degree in Social Sciences. Captain Fromholtz joined the Navy and later earned his MBA in Business Administration. Captain Fromholtz’s sea assignments included: USS Manatee, USS Hammerberg, USS Glennon. He was the Commanding Officer of the USS Fortify, USS Joseph Hewes, and while stationed in Charleston, SC he was Commanding Officer of the Fleet and Mine Warfare Training Center. His Duty stations were San Diego, Ca, Long Beach, Ca, Norfolk, Va, Washington, DC, Newport, RI, and London, UK. The Navy brought Fromholtz to Charleston, SC several times. His last tour was in Charleston, SC where he retired after 30 years of service. Captain Fromholtz supported such organizations as the Trident United Way (while in the Navy) Charleston Habitat for Humanity, Florence Crittenton Programs of SC, but his passion was always with the outreach of the Catholic Church in Summerville, SC where he and his family resided. Founding member of St. Theresa the Little Flower Church, he participated in many ministries and was an active member of several parish committees well into his 80’s. Having made a significant contribution to the people of the Catholic Diocese of Charleston in his many years of ministry within the Diocese, the Holy Father Pope Francis conferred upon him the Papal honor the Benerementi Medal, meaning “good merit” on March 7th, 2021 at the Catholic Cathedral of Saint John the Baptist in Charleston, SC. Evening Vespers were celebrated by The Most Reverend Robert E. Guglielmone, D.D. He is survived by his wife of 54 years, Sunday Fromholtz, daughter Elizabeth Bernstein (spouse Tom), his beloved granddaughter Sophia Bernstein, brother-in-law Tino Balio (spouse Mary). A gathering of family and friends will be held on Wednesday, January 26, 2022 from 5 o’clock to 7 o’clock at James A. Dyal Funeral Home. A funeral mass will be held on Thursday, January 27, 2022 at 2 o’clock at St. Theresa the Little Flower Catholic Church, 11001 Dorchester Rd., Summerville, SC 29485. Burial will be at a later date at Beaufort National Cemetery. In lieu of flowers, the family requests donations be made to St. Jude Children’s Research Hospital or the parish he so loved, St. Theresa the Little Flower Catholic Church, 11001 Dorchester Rd., Summerville, SC 29485. A memorial message may be written to the family by visiting our website at www.jamesadyal.com. ARRANGEMENTS BY JAMES A. DYAL FUNERAL HOME, 303 SOUTH MAIN STREET, SUMMERVILLE, SC 29483 (843)873-4040.

Captain Richard J. Fromholtz USN, Ret. passed away the morning of January 22, 2022, in Summerville, SC. He was born on September 21, 1937, in Massillon, OH. He was the only child of John L. Fromholtz and Irene M.Fromholtz. He was a graduate... View Obituary & Service Information

The family of Captain Richard J. Fromholtz USN, Ret. created this Life Tributes page to make it easy to share your memories.