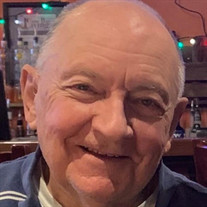 David Muller Pellnitz, of Summerville, SC, passed away on March 6. 2022. Born December 21, 1930, to Herman and Edith Pellnitz, he grew up in Nescopeck, PA., where he was valedictorian of the Nescopeck High School Class of '48. His continuing education at the Pennsylvania State College was interrupted in the summer of 1950 when the Korean War broke out and the National Guard unit of which he was a member was called to active duty. The unit, Co. I of the 109th Infantry, 28th Division, was sent to camp Atterbury, Indiana to serve as training cadre for new recruits. In a reorganization of the Company after activation, David was made Company Clerk. He served in this capacity until his discharge 13 months later, rising from the rank of Corporal to Sergeant First Class. During his time in service he was a correspondent for his local newspaper, The Berwick Enterprise. Following his discharge, David returned to Penn State, where he joined the staff of The Daily Collegian, the student newspaper. He was named Editor-in-Chief of the paper at the end of his junior year. He was also a member of the student government body, was tapped for Lion's Paw, the senior men's honor society, and was named Outstanding Independent Man. He graduated in 1953 with a BA in Journalism. After graduation he was employed by the New York World - Telegram and Sun, first in the market research department and later in the advertising sales department. When the newspaper closed in 1966, David joined the New York sales staff of Haddon Craftsman, a Scranton, PA based book manufacturing company serving the publishing industry. When the company was bought by R. R. Donnelley & Sons, Inc. in 1993, he joined their sales staff and worked for the company until his retirement in 1997. On two occasions in 1998 he was called back as a consultant. Following his retirement he was a free-lance proofreader for W. W. Norton, an independent New York publisher. David was a 60-year member of Grace Episcopal Church in Nutley, NJ, where at various times he was a Sunday School teacher, Superintendent of the Sunday School, led an adult Bible study, was a member of the adult bell choir, a licensed lay reader and chalice bearer, and served as a Vestryman and Warden. He was also active in Tres Dias of Northern New Jersey, an inter-denominational organization which sponsors men's and women's weekend retreats offering a three-day course in practical Christian living. He served on the Secretariat, the governing body of the organization in several capacities. After moving to South Carolina in 2013, David became a member of the Presbyterian Church of Cane Bay in Summerville, Sc, where he was a worship leader and enjoyed attending regularly. He also continued playing Bridge, sometimes up to five times a week. He also developed a love of Bocce Ball and played two to three times a week, weather permitting. His beloved wife of 58 years, the former Elizabeth Wedlick, predeceased him in 2016. He was also predeceased in death by his daughter-in-law, Josie Pellnitz. He is survived by two daughters, Susan Delaney (Paul) of Thousand Oaks, Ca., and Carol Staines (Alex) of Summerville, SC.; two sons, Steven of Newbury Park, CA, and Michael (Susan) of Murrells Inlet, SC.; five grandchildren and seven great-grandchildren. He also leaves a brother, Bruce (Lois) of Niceville, Fl., a sister, Luanne Grady of Charlotte, NC.; and numerous nieces and nephews scattered across the United States. A gathering of Friends and Family will be held at James A. Dyal Funeral Home on Saturday, March 12, 2022 from 2 o’clock to 4 o’clock. In lieu of flowers, memorials may be made to Grace Episcopal Church, 200 Highfield Lane, Nutley, NJ., or to Presbyterian Church of Cane Bay, 1915 State Rd. Unit B, Summerville, SC. A memorial service will be held at a later date at Grace Church. A memorial message may be written to the family by visiting our website at www.jamesadyal.com. ARRANGEMENTS BY JAMES A. DYAL FUNERAL HOME, 303 SOUTH MAIN STREET, SUMMERVILLE, SC 29483 (843)873-4040.

David Muller Pellnitz, of Summerville, SC, passed away on March 6. 2022. Born December 21, 1930, to Herman and Edith Pellnitz, he grew up in Nescopeck, PA., where he was valedictorian of the Nescopeck High School Class of '48. His continuing... View Obituary & Service Information

The family of David Muller Pellnitz created this Life Tributes page to make it easy to share your memories.

David Muller Pellnitz, of Summerville, SC, passed away on March...

Send flowers to the Pellnitz family.