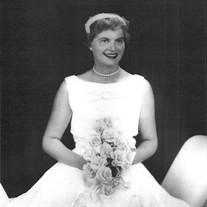 Dorothy Edla Westley, 88, wife of the late Airail Orian Westley, passed away on Thursday, June 3, 2021 at Louis and Clark Nursing Home in St Charles, MO. A graveside service will be held on Saturday, June 12, 2021 at 2 o’clock at Dorchester Memory Gardens, 11000 Dorchester Rd., Summerville, SC 29485. Flowers will be accepted. Dorothy was born on April 15, 1933 in Bangor Maine, second daughter of the late Charles and Faustina Downes. She graduated from Bangor High School in 1951 and immediately started work as a secretary for a bank in Bangor. She was recruited by The Pentagon to work for the US Navy Office of Naval Intelligence. As the Captain’s Secretary, she caught the eye of a young sailor named Yeoman Westley. They were married shortly thereafter on 30 August 1958. They both settled in the DC Area where she continued to rise in the secretary ranks when she retired as a four-star admiral’s secretary in 1992. They retired to The Low Country and made Summerville their home traveling, serving in the local church, and hanging out with grandkids for almost 30 years. She spent her last few months in a nursing home in St Charles MO. The family is very grateful for the superbly dedicated people at the Villages at Summerville and Lewis and Clark Gardens who tenderly helped in her final days. Survivors include: two sons: Kevin Westley (Kristen) of St. Louis, MO and Brian Westley (Forrest) of Pawleys Island, SC; and six grandchildren, Alexis, A.O., Caralyn, Brendan, Zachary, and Joshua. In addition to her late husband Wes and parents, she was predeceased by one son, Charles Westley, and her older sister Marguerite. Her posterity will forever remember a caring, fun, intelligent, and hardworking wife and mother. A memorial message may be written to the family by visiting our website at www.jamesadyal.com. ARRANGEMENTS BY JAMES A. DYAL FUNERAL HOME, 303 SOUTH MAIN STREET, SUMMERVILLE, SC 29483 (843)873-4040.

Dorothy Edla Westley, 88, wife of the late Airail Orian Westley, passed away on Thursday, June 3, 2021 at Louis and Clark Nursing Home in St Charles, MO. A graveside service will be held on Saturday, June 12, 2021 at 2 o&#8217;clock at Dorchester... View Obituary & Service Information

The family of Dorothy Edla Westley created this Life Tributes page to make it easy to share your memories.

Send flowers to the Westley family.