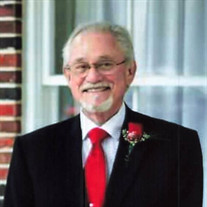 Dr. Emmett Donald Bowick, 82, of Summerville, husband of Madelyn Talbert Felton Bowick, went to be with his Savior on Thursday, April 22, 2021. Don was born on July 12, 1938, in Charleston, SC, son of the late Emmett and Eve Bowick. He is survived by his wife, Madelyn, of 39.5 years; four children: William Paul Bowick (David Bouffard) of Sedgwick, Maine, Ashley Felton Sires (Fil) of Adams Run, SC, Barrett Thomas Felton (Chrissy) of Inman, SC, and Anna Bowick Johnson (Andrew) of Summerville, SC; seven grandchildren: Alexandre’ Bowick, April Sires, Mattie Sires, Harrison “Bo” Sires, Emily Felton, William Felton, and Adelyn Gray Johnson; sister-in-law, Elizabeth A. Bowick of James Island; and many nieces and nephews. In addition to his parents, he was predeceased by son, Donald Mark Bowick; and two siblings: Clarence Lee “CL” Bowick and Brenda Bowick Johnson. Donald accepted Christ as Savior at the age of seven and was called into ministry at the age of twelve while attending James Island Baptist Church. His ministry spanned over 60 years. During those years he pastored many churches. His longest pastorate was at Calvary Baptist Church in Meggett, SC, where he served for over 21 years. Dr. Bowick was a graduate of North Greenville Junior College, Carson-Newman College, New Orleans Baptist Theological Seminary, and Luther Rice Seminary, where he received his doctorate. Don was a current member of Miles Road Baptist Church in Summerville. He also spent many years as a substitute teacher and enjoyed his time in the classroom. Donald loved history, especially the history of the Charleston Baptist Association. His favorite memories were those made over a good meal. Christmases with his family were particularly special as he would always read the story of Jesus’ birth. He enjoyed fishing and loved gardening with Ady. He found joy in making those around him laugh and he rarely met a stranger. A gathering of family and friends will be held on Saturday, May 8, 2021, from 10 o’clock to 12 o’clock at Miles Road Baptist Church, 816 Miles Road, Summerville, SC 29485. A celebration of life service will begin at noon at MRBC. In lieu of flowers, memorials may be made to Miles Road Baptist Church Missions fund, or Northwood Baptist Church 2200 Greenridge Rd., N. Charleston, SC 29406. ARRANGEMENTS BY JAMES A. DYAL FUNERAL HOME, 303 SOUTH MAIN STREET, SUMMERVILLE, SC 29483 (843)873-4040.

Dr. Emmett Donald Bowick, 82, of Summerville, husband of Madelyn Talbert Felton Bowick, went to be with his Savior on Thursday, April 22, 2021. Don was born on July 12, 1938, in Charleston, SC, son of the late Emmett and Eve Bowick. He is... View Obituary & Service Information

The family of Dr. Emmett Donald Bowick created this Life Tributes page to make it easy to share your memories.

Send flowers to the Bowick family.