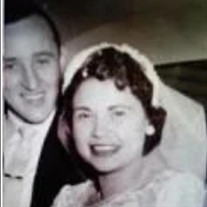 Eugene F. Culp Known by friends as Gene, Known by family as Pops or Dad Through faith a young handsome military man literally bumped into a young beautiful girl in a restaurant one evening many years ago. After sincere apologies, introductions were made. He introduced himself as Gene and she introduced herself as Florence. Dates were made and true love blossomed. Mr. Gene and Miss Florence were joined in marriage and traveled extensively through his Air Force career. His wife delighted retelling stores of the hardship of a new couple. One such story was that of a can of beans, all they had in the kitchen. Up all night with worry that her husband hadn’t come home. As the story goes, he finally came home late, real late, and with a pocket full of cash. When asked about his newly found wealth he happily explained that he got it playing dice with his military buddies. Sadly, one hardship story was of the young couples first born, a male who was still born. As time went by Mr. Genes family grew. A son, Dane and a daughter, Betty. As a military family they struggled as other military families do. When they weren’t traveling, they were waiting on phone calls and letters from their pops stationed from some far-off location. Mr. Gene was a quiet man born in Ohio in 1929, during the depression. If you wanted to know something about his life, well you had to ask. He was a humble man and good man, who later went on to say that he probably shouldn’t have played dice when he did. When asked by his son, he replied that he was a alter boy. This explains his distaste for foul language. When asked by his son to tell more about his life, he said that he boxed in the military. When asked if he ever knocked anyone out, his reply was yes. When asked if he ever lost, his reply was no. He loved baseball. It wasn’t uncommon to hear his transistor radio late at night listening to a ball game His love of baseball brought him to coach little league on the Air Force base. Quiet and humble, though he loved to play cards with his son. Eating out with his wife, and visits from his daughter. Mr. Culp will be missed by his children. His children know that he is now with his wife and his first born whom he never met. But most importantly he is with God, Our Creator and his son, Jesus who loves him dearly. We will miss you Dad Love your son, Dane and your daughter, Betty.

Eugene F. Culp Known by friends as Gene, Known by family as Pops or Dad Through faith a young handsome military man literally bumped into a young beautiful girl in a restaurant one evening many years ago. After sincere apologies, introductions... View Obituary & Service Information

The family of Eugene Culp created this Life Tributes page to make it easy to share your memories.

Eugene F. Culp
Known by friends as Gene, Known by family as Pops...

Send flowers to the Culp family.