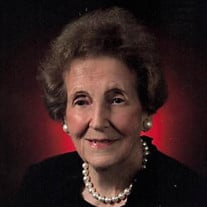 One of Summerville&#8217;s most caring and encouraging community leaders, Faith Hillier Sellers, 96, wife of the late Carl R. Sellers, died Tuesday, October 19, at The Village of Summerville, surrounded by her Family.Faith was born in Philadelphia,... View Obituary & Service Information

The family of Faith Hillier Sellers created this Life Tributes page to make it easy to share your memories.

One of Summerville’s most caring and encouraging community leaders,...

Send flowers to the Sellers family.