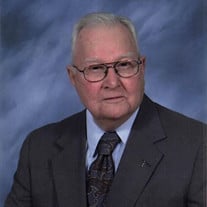 Frank Alvin Ware, 93, of Summerville, husband of the late Anne Jackson Ware, passed away on Wednesday, December 22, 2021. Family and friends are invited to attend his visitation on Monday, December 27, 2021 from 10 o’clock to 11 o’clock at First Baptist Church of Jedburg, 121 Brewer Rd., Summerville, SC 29483. A funeral service will begin at 11 o’clock at First Baptist Church of Jedburg. Burial will follow at First Baptist Church of Jedburg Cemetery. In lieu of Flowers, memorials may be made to First Baptist Church of Jedburg, 121 Brewer Rd., Summerville, SC 29483. Frank was born on August 31, 1928 in Milton, FL, son of the late William Marion and Lena Lunsford Ware. He graduated from Milton, FL High School class of 1946. He served in the Air Force for 20 years. While in the Air Force he was licensed to preach at Harvey Baptist Church in Marquette, MI and served as Pastor Ispheming, MI Mission from 1964-1966. Upon retiring from the Air Force, he moved back to Milton, FL where he was ordained as a minister by Ferris Hill Baptist Church in Milton, FL on July 6, 1969. Soon after he was to Plant Springhill Baptist Church in Munson, FL, he served as Pastor for several years before continuing his education at Baptist Bible Institute in Graceville, FL. While attending Baptist Bible Institute he served as Associate Pastor for First Baptist Church Bonifay, FL. He Pastored several other churches in Florida and Alabama before enrolling in Mobile College in Mobile, AL where he received his Masters in History and Psychology. During this time, he Pastored several churches in Florida before moving to SC. While in SC he pastored several churches before he was called to Plant Knightsville Baptist Church in Summerville, SC. While serving as Pastor at Knightsville Baptist Church, he continued his education at International Seminary and received a ThM in Church Administration, Teaching and Counseling and a ThD in Psychology, Counseling and Church Administration graduating in 1985. He served as the Pastor of Knightsville Baptist Church until his retirement in 2004. Survivors include: three children: Kathleen Francis (Gerald) of Annandale, VA, Frances Luttrell (Don) of Summerville, and Robert Ware (Rita) of Bladon Springs, AL; sister, Lessie Adams of Milton, FL, and many grandchildren and great grandchildren. In addition to his late wife Anne and parents, he was predeceased by his son, Donald Ware; and siblings: Florence Metcalf, Willena Getchell, Carlton Ware, Violet Baxley, John Ware and Fred Ware. A memorial message may be written to the family by visiting our website at www.jamesadyal.com. ARRANGEMENTS BY JAMES A. DYAL FUNERAL HOME, 303 SOUTH MAIN STREET, SUMMERVILLE, SC 29483 (843)873-4040.

The family of Frank Alvin Ware created this Life Tributes page to make it easy to share your memories.

Frank Alvin Ware, 93, of Summerville, husband of the late Anne...

Send flowers to the Ware family.