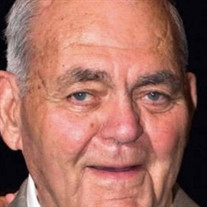 Gary McJunkin, of North Charleston died on March 28, 2021. The funeral and burial services were private. There will be a memorial service at a later date. Mr. McJunkin was born in Greenville, SC on October 12, 1931. He was the son of the late Ruth Tankersley McJunkin and James E. McJunkin. His wife of 37 years, Dot McJunkin, proceeded him in death in 2004. His surviving family includes three children, Steve Kennedy, Cindy Kennedy, and Danny McJunkin (Angela), grandchildren Michael Smith (Lori), Amy Smith, Stephanie Spencer (Justin) and Daniel McJunkin, great grandchildren McKinlee Smith and Aubree Spencer, sister Bebe Cauthen (Sidney), and sister-in-law Faye Hiers. There are two special friends who were part of his family and considered as sons, Gene Booth (Hazel) and Keith Summey (Debbie). Mr. McJunkin served 2 years in the Army, spending a year in Korea 1951-1952. When he returned home to North Charleston, he became involved with the programs of the Cooper River Parks and Playground Commission. He was appointed Director of the Commission in 1967 following the death of Danny Jones. He served as the Director until his retirement in 1994. During this time, he was involved in many community and state activities in recreation and public service. He served as an officer of the South Carolina Recreation and Park Society for 25 years, Commissioner of the Palmetto Boys Baseball, South Carolina State Director of the Fellowship of Christian Athletes, National Board of Directors of Dixie Youth Baseball, Commissioner of Dixie Youth Baseball, was selected as a life member of the National Board of Directors of Dixie Youth Baseball in 2013 and inducted into the Dixie Youth Baseball Hall of Fame in 2016. He was awarded the Order of the Palmetto by Governor Jim Hodges. He was elected as a member of the Charleston Baseball Hall of Fame and received a Lifetime Achievement Award from the Charleston Sports Council. He was inducted into the South Carolina Recreation and Park Association Hall of Fame. In addition to his love of his family and serving people in recreation programs, Mr. McJunkin loved God and serving people sharing the love of Christ. He served as Pastor and Interim Pastor for 27 years in several churches in the Charleston area. He expressed to someone that “in looking back over the years as a Recreation Director or a Pastor, you find you are basically in the same role. You are working with and affecting the lives of people. Many times these people are hurting or have a need. We all have been given gifts by God. We have the responsibility to use that gift to reach out to other people and show them the love of God and how He can make their life better. That can come through the Church, on the field, in the pool or on the court. Where you find people, you find an opportunity and where there is an opportunity you can find God there. I have been blessed with wonderful people in my life, both in recreation and in the churches. I am so thankful for my wife, family, children, grandchildren and great grandchildren. There have been many wonderful volunteers, I could never count all of them. I am appreciative of the honors I have received. You can look at all of these things and say they are nice, great or wonderful and they could all be in that category. But none of these, with all of their love, kindness and support can exceed Jesus. Jesus came, lived and died for me. All that I may have given or received by my friends and wonderful family does not exceed His gift to me. It has been great to give back to others.” In lieu of flowers, donations can be made to Homestead Hospice, 133 East 1st North #9, Summerville, SC 29483. The family would like to thank them for their caring and devotion during his final weeks. A memorial message may be written to the family by visiting our website at www.jamesadyal.com. ARRANGEMENTS BY JAMES A. DYAL FUNERAL HOME, 303 SOUTH MAIN STREET, SUMMERVILLE, SC 29483 (843)873-4040.

Gary McJunkin, of North Charleston died on March 28, 2021. The funeral and burial services were private. There will be a memorial service at a later date. Mr. McJunkin was born in Greenville, SC on October 12, 1931. He was the son of the... View Obituary & Service Information

The family of Gary McJunkin created this Life Tributes page to make it easy to share your memories.

Send flowers to the McJunkin family.