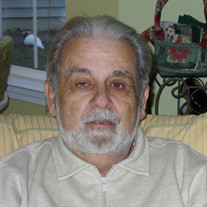 Gilbert “Gil” S. Medeiros, Jr., 84, of Summerville, beloved husband of Martha ‘Marty’ Jennings Medeiros, passed away on Tuesday, January 11, 2022 with his wife, daughter and granddaughter at his side. Gil and Marty were happily married for 65 years. Gil was born on October 5, 1937 in Massachusetts, son of the late Gilbert S Medeiros, Sr. and Adeline B. Medeiros. At 18, Gil joined the Air Force and met his wife while living in Columbus, OH. After retiring from the Air Force, Gil worked as a government contractor for 20 years. Gil always enjoyed helping others, regularly volunteering for the Boy Scouts, Habitat for Humanity, as well as being a handyman in his community. Gil was always willing to lend a hand and everyone who knew him loved him. Gil was a devoted father. His children, Michelle and Jeff, loved him dearly, and he was wonderful grandfather to their children. Gil was a father figure for his nieces who will miss him dearly. Gil supported his family through ups and downs, always supporting them and celebrating their accomplishments. Gil was also a dog lover, and could often be seen sitting with or walking his beloved dog, Bentley. Survivors in addition to his wife Marty are: two children: Michelle Medeiros (partner Vincent Custers) of the Netherlands, and Jeffrey Allan Medeiros (partner Kim Wright) of Hanover, PA; he had two grandchildren: Amy Dena Medeiros Schwarz (husband Charlie) and Max Custers; great grandchildren: Jacob Medeiros, and Joseph Mejia; and was like a father to his many nieces and nephews. In lieu of flowers, memorials may be made to Dorchester Paws, 136 four Paws Lane, Summerville, SC 29483. A memorial message may be written to the family by visiting our website at www.jamesadyal.com. ARRANGEMENTS BY JAMES A. DYAL FUNERAL HOME, 303 SOUTH MAIN STREET, SUMMERVILLE, SC 29483 (843)873-4040.

The family of Gilbert "Gil" S. Medeiros, Jr. created this Life Tributes page to make it easy to share your memories.

Send flowers to the Medeiros, family.