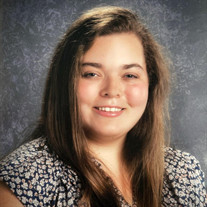 Hannah Caitlin Hatherly, 24, of Summerville, passed away on Wednesday, August 18, 2021 at Summerville Medical Center. Family and friends are invited to attend her visitation on Monday, August 23, 2021 from 11 o’clock to 12 o’clock at James A. Dyal Funeral Home. A funeral service will begin at 12 o’clock at James A. Dyal Funeral Home Chapel. Flowers will be accepted, potted plants are preferred. Hannah was born on March 5, 1997 in Chattanooga, TN, daughter of Gary and Tina Hatherly of Summerville. She graduated from Fort Mill High School and received her Bachelors in General Biology from Charleston Southern University. She was remakable at the saxophone, sewing, painting, and so much more. Survivors in addition to her parents are: two sisters: Lauren Beattie (Eric) of Las Vegas, NV and Hayley Hatherly of Pensacola, FL; grandmother, Arlene Holt of Cleveland, TN; aunts and uncles: Farren Holt (Tanya) of Cleveland, TN, April Meyers (Williams) of Cleveland, TN, Denise Meyers of Cleveland, TN, and Howard Hatherly (Mary) of Houghton Lake, MI; and many loved cousins. She was predeceased by : uncle, Darren Holt and grandfather, Owen Holt, and grandparents: Dora Jean Hatherly and Glenn Hatherly. A memorial message may be written to the family by visiting our website at www.jamesadyal.com. ARRANGEMENTS BY JAMES A. DYAL FUNERAL HOME, 303 SOUTH MAIN STREET, SUMMERVILLE, SC 29483 (843)873-4040.

The family of Hannah Caitlin Hatherly created this Life Tributes page to make it easy to share your memories.

Hannah Caitlin Hatherly, 24, of Summerville, passed away on Wednesday,...

Send flowers to the Hatherly family.