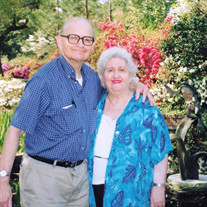 Alice Heloise Price Luton, 84, went to be with the Lord, Monday November 2, 2020. She was born in Lee Country, Virginia in 1936 and later moved to Knoxville, TN. She attended Central High School in Knoxville, TN and graduated from Harrison Chilhowie Baptist Academy in 1954. She attended Hiawassee College in TN and then graduated from the University of Tennessee, Memphis in 1959 with a BS degree in nursing. In December 1959 she married Jonathan P. Luton, an officer in the U. S. Navy. She worked as an RN at DePaul Hospital in Norfolk, VA around 1960. During her husband’s 25 year naval career they moved around to Iwakuni, Japan, Anapolis Md, Pensacola, FL, Argentia Newfoundland, Canada, Indian Head, Md and finally Virginia Beach, VA. In Virginia Beach she was active in her church, Community United Methodist Church. She had been residing in Summerville, SC for 4 years and attending Bethany United Methodist Church. She is preceded in death by her husband J. P. Luton of Union City, TN and brother James Price of Knoxville, TN and sister Vida K. McArn of Cowpens, SC. She is survived by her children, J. Paul Luton of Richmond, Va, David S. Luton of Valencia Spain, and Mary K. “Lisette” Luton of Summerville, SC; grandchildren Michelle and Sara; and sister Mary Lynette Geisler and brother H. Victor Price of Knoxville, TN; and many nieces and nephews. The visitation will take place at Dyal funeral home from 2-4 pm on Sunday, Nov. 15 at 303 S. Main St. Summerville, SC. At a later time, burial will be at Virginia State Veteran’s Cemetery in Suffolk, VA and memorial services will be held in Virginia Beach and Knoxville, TN. Memorial Donations may be made to Community United Methodist Church in Virginia, Beach, VA. Condolences may be offered to the family at www.jamesadyal.com A memorial message may be written to the family by visiting our website at www.jamesadyal.com. ARRANGEMENTS BY JAMES A. DYAL FUNERAL HOME, 303 SOUTH MAIN STREET, SUMMERVILLE, SC 29483 (843)873-4040.

Alice Heloise Price Luton, 84, went to be with the Lord, Monday November 2, 2020. She was born in Lee Country, Virginia in 1936 and later moved to Knoxville, TN. She attended Central High School in Knoxville, TN and graduated from Harrison... View Obituary & Service Information

The family of Heloise Price Luton created this Life Tributes page to make it easy to share your memories.

Alice Heloise Price Luton, 84, went to be with the Lord, Monday...

Send flowers to the Luton family.