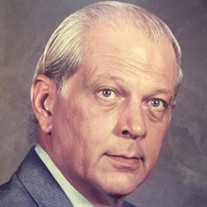 James Milton (Milt) Erickson, 88, of Charleston, SC, passed away peacefully Thursday morning, February 17, 2022, at the Veterans Victory House in Walterboro, SC. Born in Dickinson, ND on June 15, 1933, to Roy J. Erickson and Abbie M. (Stromert) Erickson, Milt spent his formative years in Kankakee, IL, with his parents and older sister Mertyce. Excelling in sports, Milt received a scholarship to Northwestern University in Evanston, IL, north of Chicago, where he played on the university football team. At Northwestern, Milt joined the Sigma Chi fraternity and met the young woman who was to be his wife of 59 years, Alice M. Piper. Milt left college to serve in the Army in Korea and returned to Northwestern to complete his B.S. in Economics in 1957. Following in his father’s footsteps Milt entered the JCPenney Company, advancing over the course of 20 years through a series of promotions that took the family around the Upper Midwest and North Texas. Milt left Penney’s in 1977 to start his own retail store in the resort town of Minocqua, WI, eventually leaving the snow to resettle first in North Myrtle Beach, SC and then in Charleston, SC’s Shadowmoss neighborhood where he and Alice lived for more than 25 years. Milt’s encore career at Kiawah Resort capped a lifelong long love of golf. For more than 20 years Milt served at Kiawah’s famed Turtle Point, Cassique and Ocean Courses, finally retiring on his 80th birthday. The family jokes that Milt’s motto was “God and golf,” and off the greens, he was a faithful member of Rutledge Memorial Baptist Church (now Grace on the Ashley), where he was a leader of the deacons and member of the choir. He also served as head of his community’s HOA, prompting Alice to ribbingly address him at home as “Mr. President.” Most of all, Milt is remembered for his love for Alice, who suffered a cerebral hemorrhage at age 33 and for whom Milt cared tirelessly for 56 years. Milt is survived by his two children, Bradley R. Erickson of Summerville and Julie M. Mitchem of Columbia, and their spouses Brian Protheroe and Lee Mitchem, as well as his two grandchildren, Elizabeth M. Nodelman, M.D., and Erick R. Bassett, Esq., their spouses Matthew Nodelman, M.D., and Hillary Bassett, and two great-grandchildren, Elijah Nodelman and Eleanor Bassett. Milt was preceded in death by his parents Roy J. Erickson and Abbie M. Erickson, his wife Alice M. Erickson, and sister Mertyce A. Meyer. A memorial message may be written to the family by visiting our website at www.jamesadyal.com. ARRANGEMENTS BY JAMES A. DYAL FUNERAL HOME, 303 SOUTH MAIN STREET, SUMMERVILLE, SC 29483 (843)873-4040.

The family of James Milton Erickson created this Life Tributes page to make it easy to share your memories.

Send flowers to the Erickson family.