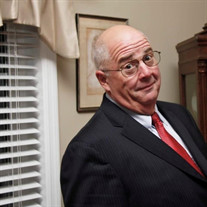 Not sure what to send?

James (Jim) Herbert Messervy, Sr, of Summerville, South Carolina passed away surrounded by his wife and children on May 10, 2022 after a battle with non-Hodgkin’s lymphoma. He was 76 years old. Jim was the son of Thomas William Messervy (“Doc”) and Elizabeth G. Messervy (“Lib”). He enjoyed being lifelong resident of Summerville and a graduate of Summerville High School. After high school, he followed his brother to The Citadel (where he was affectionately known as “Hoby” by his classmates). Jim was a dedicated Citadel alumni serving on various committees and boards, most recently supporting college athletics through his involvement with The Citadel Brigadier Foundation. Upon graduation from The Citadel, Jim received his Juris Doctorate degree from the University of South Carolina, where he took an odd pride in taking an extra year to graduate due to excessive golf and partying. Jim was sworn in as a member of the South Carolina Bar in 1973 and practiced law in Summerville until his recent retirement from PMC Law Firm, where he was a founding member and a constant presence. During his life, “Big Jim” was many things to many people in the communities of Summerville and Dorchester County. He was a liberal Democrat who was accepted and loved by even the most die-hard of Republicans (who preferred to call him an Independent). He was a public servant, having served in the South Carolina House of Representatives, working for the Solicitor’s Office for almost thirty years and holding numerous volunteer positions in the community including President of the Francis R. Willis (now Dorchester Paws) SPCA, President of the Dorchester County Bar Association and co-founder of the Dorchester County Fund through the Coastal Community Foundation, as well as countless other organizations. He was a mentor to so many new lawyers, including his daughter, as they started or developed their careers. He was, at his core, concerned with fairness and justice which led him to serve as a part-time Magistrate Judge and Town Judge during his legal career. He was a devout Christian, a great storyteller, a town historian, and a gentleman.Of course, his most important role was patriarch of his family. To know Big Jim was to hear his stories and to see the pride he took in those he leaves behind. Jim is survived by his wife, Linda T. Messervy and three children; Tiffany Provence, James H. Messervy Jr. (“JJ”) and Ashleigh Messervy, who all live in the lowcountry. Tiffany has two children, Drake and Mason Nisbet and three stepchildren with husband Ted Chavez; Andy, Alex and Adam Chavez. JJ has two children, Hoby and Jake Messervy. Ashleigh has two stepchildren with husband Jess Cuthbert; Brennan and Finley Cuthbert. He is also survived by his brother, Dr. Thomas Messervy and his children, Thomas and Katie Messervy. Regardless of how they came to join his family, Jim loved being surrounded by loved ones and was always ready with a hug. His happiest days were those cheering on the sidelines as a child or grandchild participated in a sporting or academic event. His passing will leave a huge hole in both our family and this community. His final words to all of us were to take care of one another. Jim has requested that no funeral service be held in his honor, but that instead his friends and family come together and celebrate a life well lived in a community he deeply loved. The family will honor this request by hosting a drop in to celebrate his life at Summerville Country Club on Sunday, June 19th (Father’s Day) beginning at 6:00 pm. In lieu of flowers, please consider donating a gift in his honor to his favorite cause, the Dorchester Paws Capital Campaign at 136 Four Paws Lane, Summerville, SC 29483.

James (Jim) Herbert Messervy, Sr, of Summerville, South Carolina passed away surrounded by his wife and children on May 10, 2022 after a battle with non-Hodgkin&#8217;s lymphoma. He was 76 years old. Jim was the son of Thomas William Messervy... View Obituary & Service Information

The family of James H. Messervy created this Life Tributes page to make it easy to share your memories.

Send flowers to the Messervy family.