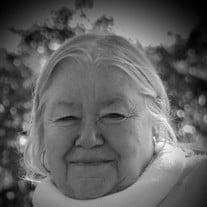 Janet Katheryne Maher Kmetz, 73, of Summerville, wife of Captain Stephen G. Kmetz USN (Ret.) passed away on Thursday, November 26, 2020 at her residence. Family and friends are invited to attend her visitation on Monday, November 30, 2020 from 6 to 8 o’clock in the evening at James A. Dyal Funeral Home. Funeral Service will be held on Tuesday, December 1, 2020 at 10 o’clock in the morning at St. Paul’s Summerville, 316 Carolina Ave., Summerville. A private burial will be held at Beaufort National Cemetery. In lieu of flowers, memorials may be made to Lungevity Foundation https://lungevity.org or St. Paul’s Summerville https://www.stpaulssummerville.org. Janet was born on June 28, 1947 in New London, CT, daughter of the late David Balfour Ashe and Lois Katheryne McCann Maher. Growing up, she resided all over the United States with her parents and three siblings as her father’s career with the United States Navy moved the family often. Janet graduated from James Madison High School in Vienna, Virginia in 1965, attended George Washington University and graduated from Long Beach State University with a degree in Education in 1969. Janet began her teaching career in Guam, where she met and fell in love with Stephen Kmetz, her beloved husband of 46 years. Steve’s Naval career settled the young couple in Summerville, SC where Janet dedicated 30 years to teaching Social Studies to middle school students at Oakbrook and Alston, as well as raising her 3 boys. She never hesitated to coach the boys YMCA basketball or soccer and spent many years traveling with Summerville Soccer Club. In addition to Janet’s dedication to her family and her students, she truly enjoyed spending time with her fellow teachers. Many times, her conversations would involve stories from the teacher’s lounge and she always looked forward to her monthly teacher luncheons, which lasted well beyond her retirement in 2004. Janet was blessed with six grandchildren and she spent countless hours reading books aloud to each and every one of them. In her retirement, she and Steve traveled the world on cruise ships, oftentimes with extended family and always made friends along the way. Janet’s capacity for history, whether educating herself or others, was tremendous and she made the most of learning about every place that she visited. The Kmetz family would like to express gratitude to The Reverend John F. Scott and St. Paul’s Summerville for graciously honoring Janet’s wishes and providing spiritual guidance. We are also most appreciative of the outpouring of support from Janet’s friends and neighbors, including her esteemed teaching community. Survivors including her husband are: three children: Michael M. Kmetz (Emily) of Summerville, Stephen D. Kmetz (Megan) of Fort Worth, TX, and James J. Kmetz (Lynsey) of Charlotte, NC; six grandchildren: Amelia, Jack, Lucile, James, Madeleine and Carter; two siblings: Carol S. Weaver of Camarillo, CA and David B. Maher (Judy) of Oakland, CA. She was predeceased by one sister: Edie L. Sims. A memorial message may be written to the family by visiting our website at www.jamesadyal.com. ARRANGEMENTS BY JAMES A. DYALFUNERAL HOME, 303 SOUTH MAIN STREET, SUMMERVILLE, SC 29483 (843)873-4040.

Janet Katheryne Maher Kmetz, 73, of Summerville, wife of Captain Stephen G. Kmetz USN (Ret.) passed away on Thursday, November 26, 2020 at her residence. Family and friends are invited to attend her visitation on Monday, November 30, 2020 from... View Obituary & Service Information

The family of Janet Katheryne Maher Kmetz created this Life Tributes page to make it easy to share your memories.

Send flowers to the Kmetz family.