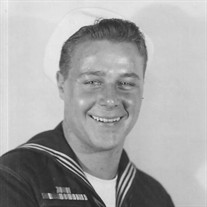 Mr. John “Ace” Henry Bruins, 95, of Walterboro, passed away on Thursday, October 7, 2021 at his residence. Family and friends are invited to attend his Graveside Service on Wednesday, October 13. 2021 at 11 o’clock at Dorchester Memory Gardens, 11000 Dorchester Road, Summerville. Mr. Bruins was born in Crandon, SD on November 5, 1925, son of the late John Bruins Sr., and Wilma Bruins Klaus. Mr. Bruins served his country in the United States Navy. He served in World War II and the Korean War, when they signed the Peace Treaty in Tokoyo and Atom Bomb test in Bikkinni Atoll. He reached the rank of of Boiler Technician 2nd class in the US Navy. He was in the American Theatre and Asiatic Pacific Theatre, and Philippine Liberation. He then worked at SCE&G in Charleston and Walterboro plants for 33 years and retired from Canadys. He went to church at Pleasant Grove, Walterboro. He will be remembered as a loving husband and father always there to help others. He was outspoken and had a sense of humor. In lieu of flowers memorials may be made to Veterans Victory House, 2461 Sidneys Road, Walterboro, SC 29488. Survivors include two sons & three daughters: Richard A. Bruins of Stonesville, NC, Gary Hale of Walterboro, Rose M. Gillis of Coatesville, PA, Charlotte Maya of Walterboro and Theresa Byrd; fourteen grandchildren; thirty great grandchildren and four great great grandchildren; two brothers and four sisters: Oscar E. Bruins, James Bruins, Myrna Ann Woodell, Marilyn Winterton, Sally Roe and Lila M. May. He was predeceased by his four wives: Joyce Gullett, Ruth Mather, Ruth Herndon and Carol Raymond; one daughter and one son: Rita Bruins and Gerald Raymond Bruins and one brother and two sisters: Cecil Bruins, Sharon B. Bruins and Carolyn Odermott. A very special thanks to granddaughter: Sheri Dandridge and her husband Aaron for taking good care of Mr. Bruins. A memorial message may be written to the family by visiting our website at www.jamesadyal.com. ARRANGEMENTS BY JAMES A. DYAL FUNERAL HOME, 303 SOUTH MAIN STREET, SUMMERVILLE, SC 29483 (843)873-4040.

The family of John Henry Bruins created this Life Tributes page to make it easy to share your memories.

Send flowers to the Bruins family.