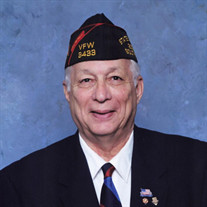 John David “Dave” Mellert, 82, of Summerville, husband of Iris Kaye Mellert, passed away on Thursday, March 3, 2022 at Summerville Medical Center in Summerville. Family and friends are invited to attend his visitation on Tuesday, March 8, 2022 from 6 o’clock to 8 o’ clock at James A. Dyal Funeral Home. A funeral service will be held on Wednesday, March 9, 2022 at 11 o’clock at James A. Dyal Funeral Home. Burial will follow at Dorchester Memory Gardens Mausoleum located at 11000 Dorchester Road, Summerville, SC 29485. Immediately following the service there will be a reception at the VFW 3433, 10154 Bell Wright Rd., Summerville, SC 29483. In lieu of flowers, donations may be made to Fisher House Charleston, 150 Wentworth St., Charleston, SC 29401. Dave was born on February 29, 1940 in Phillipsburg, New Jersey, the son of the late Albert and Lois Mellert. Dave entered the U.S. Air Force in 1959 and retired in 1987. He was a Chief Flight Engineer for Evergreen International Airline. He was a State Commander for VFW and was a reading and math mentor at Summerville Elementary. He was also active in the Boy Scouts. Survivors in addition to his wife are: Children: Charles David Griffin, Karen Griffin, Terri Bennett, Valerie Finney; Siblings: Timothy Mellert, Mary Lou Volkert, Marion Beatty, Patti Ann Taylor, and Susan Cassidy. In addition to his parents, he is predeceased brothers, James Mellert, Alfred Mellert, Dale Mellert, Thomas Mellert, Stephen Mellert and Richard Mellert. A memorial message may be written to the family by visiting our website at www.jamesadyal.com. ARRANGEMENTS BY JAMES A. DYAL FUNERAL HOME, 303 SOUTH MAIN STREET, SUMMERVILLE, SC 29483 (843)873-4040.

The family of John David Mellert created this Life Tributes page to make it easy to share your memories.

Send flowers to the Mellert family.