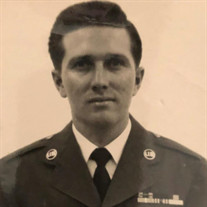 John Bascom Steele, Jr. entered eternal rest on Tuesday, September 7, 2021. Family and friends are invited to attend the visitation at 3:00 p.m. on Sunday, September 12, 2021 at the James A.Dyal Funeral Home Chapel located at 303 S. Main Street, Summerville, SC. The funeral service will begin at 4:00 p.m. followed by the graveside service at the Dorchester Memorial Gardens. In lieu of flowers, a donation in his honor can be made to the Wounded Warrior Project www.woundedwarriorproject.org, a cause he was passionate about, supporting veterans. Mr. Steele was born on April 9, 1935 in Coeburn, Va., son of the late John Bascom Steele, Sr. and Ruby Hall Steele of Coeburn, Va. He served in the US Navy for five years and then entered the US Air Force, serving 20 years and retiring in 1972 while serving at Warner Robins, GA Air Force Base. 1stSgt John Steele was a combat veteran of the Vietnam War and Korean War. During his military career he received many letters of achievements honoring his distinctive accomplishments which culminated a distinguished career in the service of his country and reflected credit upon himself and the US Air Force. After retirement, he graduated from Trident College with a degree in Restaurant Hospitality and then began his civil service career as manager of the Officers Club and Chief Petty Officers Club prior to the Charleston Naval Base closing. In his later retirement years, he worked for a local gutter company and became known as "The Gutter Man of the Lowcountry." "JB" as he was known by many, loved to bowl, play cards and pool. Fishing and being on the lake at Bonneau Beach, SC was also a favorite past time. He enjoyed his home in the mountains in Flat Rock, NC where he made many close friends. He served as the Past President of the Lions Club and was a 32° Degree Mason in the Blue Lodge in Coeburn, Virginia. He is survived by his wife, Beth Mullins Steele and his children, John David Steele (Tammy), Nancy Steele Mauldin, Shawna Steele Williams (Larry), Steven Douglas Steele, and stepdaughter, preceded in death, Mitzie Arnold. A sister Evelyn Sue McCormick (Ben), niece April McCormick and nephew Brian McCormick (Becky) who reside in Pittsburgh, PA. He was the King to the following grandchildren: Jonathan Trimble (Leta), Jon Justin Steele Ricker (Julia), Katie Beth Kaufman, Kelly Steele Turner (Ken), John David Steele (Jasmine), Caroline Steele, Jackson Steele, Stacie Abeita (Marvin), Kristie Fleming (Russ), Austin Arnold (Abby). And great-grandchildren: Kylie Turner, Kenzie Turner, Carly Trimble. Due to COVID-19 protocols, everyone is required to wear a face mask and practice social distancing during the funeral services. A memorial message may be written to the family by visiting our website at www.jamesadyal.com. ARRANGEMENTS BY JAMES A. DYAL FUNERAL HOME, 303 SOUTH MAIN STREET, SUMMERVILLE, SC 29483 (843)873-4040.

The family of John Bascom Steele, Jr. created this Life Tributes page to make it easy to share your memories.

Send flowers to the Steele, family.