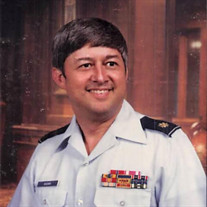 Louis “Lou” Stuart Bodony, 81, of Summerville, husband of Kathryn “Kelly” Bodony, passed away on Tuesday, March 15, 2022 at his residence. A gathering of family and friends will be held on Sunday, March 27, 2022 from 6:00 P.M. to 9:00 P.M at James A. Dyal Funeral Home. A prayer service will begin at 7:00 P.M. A memorial mass will be held on Monday, March 28, 2022 at 10 A.M. at St. John the Beloved Catholic Church, 28 Sumter Avenue, Summerville, SC 29483. Burial will follow at 2:00 P.M. at Beaufort National Cemetery, 1601 Boundary Street, Beaufort, SC 29902. In lieu of flowers, memorials may be made to the Folds of Honor Foundation at the following website: www.foh.org/LouisBodony. Lou was born on June 17, 1940 in Washington, D.C., the son of the late Louis Charles Bodony and Emily “Kish” Bodony. He was a retired Major in the United States Air Force where he served in the Vietnam War and was the recipient of the Bronze Star. He truly loved his military career. Lou attended St. John the Beloved Catholic Church in Summerville. He was an officer in the Knights of Columbus Council Number 11910 and was a 4th Degree Knight. He was an active member in the Charleston Chapter (#297) of the Air Force Association. He volunteered as a fireman in many places in which he lived. He called himself the Chief of his department of beloved 245 hand built model fire truck collection. Survivors in addition to his wife, Kathryn of fifty-six years: four children: Edward Stuart Bodony (Kelli) of Bonaire, GA, Daniel Anthony Bodony (Julie) of Peoria, AZ, Michael Sean Bodony (Hannah) of Goose Creek, SC, Gary Thomas Bodony (Aimee) of Olathe, KS; ten grandchildren: Jacob, Amanda, Brandon, Emily, Taitum, Rylee, Brayden, Reigan, Vincent and Grant; five siblings: Michael Bodony, (Maria) of Austin, TX, Marianne King (Eugene) of Carol Stream, IL, James Bodony (Lynne) of Glen Ellyn, IL, Jeffrey Bodony (Elizabeth) of Days Creek, OR, Charles Bodony (Katie) of Port Townsend, WA. He was predeceased by his brother, John Howard Bodony. A memorial message may be written to the family by visiting our website at www.jamesadyal.com. ARRANGEMENTS BY JAMES A. DYAL FUNERAL HOME, 303 SOUTH MAIN STREET, SUMMERVILLE, SC 29483 (843) 873-4040.

The family of Louis "Lou" Stuart Bodony created this Life Tributes page to make it easy to share your memories.

Send flowers to the Bodony family.