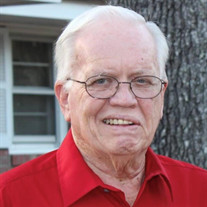 In the wee hours of the morning, July 3, 2021, heaven's doors flung open wide as Marvin "Buddy" Locke humbly walked into the arms of Jesus. Born and raised in Orlando, Florida, Buddy attended Florida State University before serving as a cryptologist in the United States Air Force in Vietnam. He returned to the States and graduated from the Baptist College in Charleston before receiving his Masters+ from Central Michigan University. He went to work for the SC Department of Mental Health serving in Human Resources positions both in Columbia and at the Coastal Center of Charleston. He then made a move to designing metal buildings for Limehouse and Frampton followed by Hoover Buildings. Upon answering the call to full time pastoral ministry, Buddy accepted the Senior Pastor position at Pleasant Grove Baptist Church in Summerville, SC where he pastored for 10 years. He then accepted the call to pastor at Corinth Baptist Church in Vance, SC where he faithfully and boldly served not just his church but his community until he retired in 2015. Following retirement, he continued to serve but this time in a volunteer role as he joined his son's staff at the First Baptist Church of Holly Hill as Senior Adult Pastor. He faithfully served this congregation and her pastor, Rev Shaun Daley until his health kept him from doing so. While in Charleston, Buddy served as Assistant to then Baptist College President Dr. John Hamrick. It was while serving in this role that he met the love of his life and wife of 47 years, Connie. The two of them would welcome Carrie Lee into the world in July of 1980 before bringing Marshall David along in April of 1987. As a family they enjoyed many trips to Charleston and Folly Beach, sitting on the cannons of the Battery and collecting seashells along the shore. A collector of all things, Buddy never found a watch, knife or gun in which he didn't find interest. But his alone time was often spent enjoying the beauty of God's creation while wetting a fishing line. He did his best to be all things to all people. Those who knew him best say, "he was always there when I needed him." Buddy was preceded in death by his parents, Clifford and Myrtis Locke. He is survived by his wife Connie of the home, daughter, Carrie (Jesse) McDonald of Washington, IN, son, Marshall (Tiffany) Locke of Lexington, SC, grandchildren Madilyn & Kierstyn McGough, Emmalyn McDonald of Washington, IN, Braxton, Davis, Sullivan, Ellington Jane Locke of Lexington, SC. He is also survived by his sister Pat Hunt of Summerville, SC, his mother-in-law Reba Whittle of Santee, SC, his brother-in-law Del (Sherry) Whittle of Santee, SC, his nieces and nephews Jan (Steve) Brown, David (Connie) Hunt, Linda (Ron) Dickert, Cliff (Jane) Hunt, Dawn (Cris) Brennan, Jamie (Joe) Arnold, and Sue (Paul) Zupka as well as many great nieces and nephews. The family would also like to thank David Green for his years of loyal friendship. Visitation will be held from 6-8pm on Friday, July 9, 2021 at James A. Dyal Funeral Home at 303 S. Main St in Summerville, SC. The funeral service will be held at 2pm on Saturday, July 10, 2021, at The First Baptist Church of Holly Hill at 8455 Old State Rd in Holly Hill, SC with Rev. Shaun Daley and Rev. Marshall Locke officiating. Interment will follow at Corinth Baptist Church Cemetery, Vance, SC. Flowers will be accepted. A memorial message may be written to the family by visiting our website at www.jamesadyal.com ARRANGEMENTS BY JAMES A. DYAL FUNERAL HOME, 303 S. MAIN STREET, SUMMERVILLE, SC 29483 (843) 873-4040

The family of Marvin D Locke created this Life Tributes page to make it easy to share your memories.

Send flowers to the Locke family.