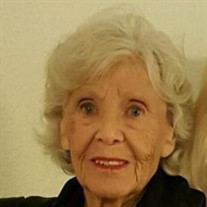 Peggy Jo Corbett, 91, of Summerville, wife of the late Donald Lloyd Corbett, passed away on Tuesday, March 23, 2021 at Stratford Place. Family and friends are invited to attend her visitation on Thursday, March 25, 2021 from 2 o’clock to 3 o’clock at James A. Dyal Funeral Home. A funeral service will begin at 3 o’clock. Burial will be private. Flowers will be accepted or memorials may be made to Agape Hospice, 2680 Elms Plantation Blvd., Unit 101, N. Charleston, SC 29406. Peggy was born on April 20, 1929 in Seminole, OK, daughter of the late Fred and Pearl Reid. In January 1952 she met and married SMSGT Donald Corbett of Carolina Beach, NC, who was a member of the USAF. A life of travel began then as the wife of a military man. Eventually they were able to establish a permanent home in Summerville when her husband retired from the Air Force in 1965. Her dear husband, Donald, then began a second career with the National Weather Service of Charleston. He retired in 1984 and pre-deceased her in 1994. Both parents put great value on their family, friendships, and Christian faith. Their daughters, sons-in-law, grandchildren, great grandchildren, and all of their friends provided much pleasure in their lives. Peggy and her family are life long members of Summerville Baptist Church. Survivors include: three daughters: Kelly Browder and husband Al of Summerville, Connie Coyle and husband Daniel of Summerville, and Julie Birt and husband Eric of Johns Island; four grandchildren: Trey Trexler of Johns Island, Michael Browder and wife Margaret of Summerville, Reid Coyle and wife Tess of Summerville, Olivia Waldthausen and husband Alex of Columbia; two great granddaughters: Emily Grace Browder and Anna Reid Browder; and great nephew, John Jensen and wife Kristen of West Ashley. In addition to her parents, she was predeceased by daughter, Wanda Corbett; two sisters and a brother. A memorial message may be written to the family by visiting our website at www.jamesadyal.com. ARRANGEMENTS BY JAMES A. DYAL FUNERAL HOME, 303 SOUTH MAIN STREET, SUMMERVILLE, SC 29483 (843)873-4040.

Peggy Jo Corbett, 91, of Summerville, wife of the late Donald Lloyd Corbett, passed away on Tuesday, March 23, 2021 at Stratford Place. Family and friends are invited to attend her visitation on Thursday, March 25, 2021 from 2 o&#8217;clock... View Obituary & Service Information

The family of Peggy Jo Corbett created this Life Tributes page to make it easy to share your memories.

Peggy Jo Corbett, 91, of Summerville, wife of the late Donald...

Send flowers to the Corbett family.