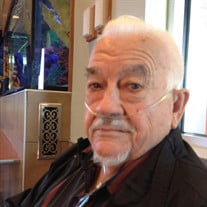 Rev. Bobby Gene Warmoth, 91, of Summerville, former husband of Eunice Mozelle Warmoth (deceased), and later in life, Marilyn Rotell Warmoth, passed away on Wednesday, February 10, 2021, at Summerville Community Hospice House. Bobby was born on January 25, 1930, in Chester, SC, son of the late James Richard and Fanny Bell Warmoth. His distinguished 21 years of service in the U.S. Navy began as an enlisted shipman. Early in his military career, he served as Naval Attaché at the U.S. Embassy in Mexico City, Mexico. He was among the first within the ranks of Enlisted Personnel to be promoted to Officer Status as a Lieutenant J.G.; subsequently, he was promoted to full Lieutenant. As Lieutenant, Young Bobby, as he was known, was entrusted with the position of Naval Aide for the Admiral of the Naval Amphibious Base at Little Creek, VA. After his military career, Young Bobby, ever a servant, moved on to ministerial pursuits. He was graduated with a Baccalaureate: Theological Degree from Liberty Christian College in Pensacola, FL. Reverend Bobby had a heart for starting churches and discipling The Flock from Florida to South Carolina to Virginia. Bobby was a loving and dedicated husband and father, and a mentor and friend to all he met. He cherished fellowshipping and breaking bread with those he loved, which was everybody. He also enjoyed taking long scenic rides through the peacefulness of God’s countryside with family. Wherever the Lord Sent him, Bobby was quick to take every opportunity that He Provided to pray for, minister to, and counsel those he met. We love you, Poppa and Pastor Dad, and we look forward to meeting up with you again when the Kingdom of God is fully realized here on Earth. Survivors, in addition to his former wife, Marilyn, are: four children: Richard Gene Warmoth (deceased), Edward Lee Warmoth and wife Sandra of Oviedo, FL, Sebastane Warmoth of Summerville, and Sierra Warmoth of Summerville; granddaughter, Brittany Warmoth Honaker, and grandsons Shawn and George Spurling; as well as two great granddaughters, Haley and Emily Honaker; and many beloved nieces and nephews. Family and friends are invited to attend his visitation on Sunday, February 14, 2021, from 1 o’clock to 2 o’clock at Bacons Bridge Free Worship Center, 1816 Bacons Bridge Rd., Summerville, SC 29485. A memorial service will begin at 2 o’clock. Burial with full military honors will be on Monday, February 15, 2021 at 9 o’clock at Beaufort National Cemetery, 1601 Boundary St., Beaufort, SC 29902. In lieu of flowers, memorials may be made to a charity of your choice. A memorial message may be written to the family by visiting our website at www.jamesadyal.com. ARRANGEMENTS BY JAMES A. DYAL FUNERAL HOME, 303 SOUTH MAIN STREET, SUMMERVILLE, SC 29483 (843)873-4040.

The family of Rev. Bobby Gene Warmoth created this Life Tributes page to make it easy to share your memories.

Send flowers to the Warmoth family.