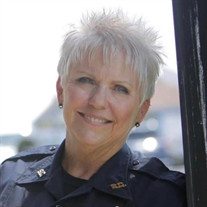 Sandra Demaris Bowersox, 74 of Summerville, wife of Rodney B. Bowersox, passed away on Monday August 30, 2021 at Roper Mt. Pleasant Hospital. The family will hold a celebration of life at a later date. Sandra was born on May 9, 1947 in Palestine, Texas, the daughter of Boyd and Pauline Huggins. Sandra was vibrant, outgoing and had an infectious smile that lit up every room she entered. She was extremely proud of her three children and eight grandchildren that luckily all followed their parents from Texas to South Carolina. Sandra loved people and always wanted to help whenever she could. Her outlook on life was you get back what you give and she gave a lot. She loved singing with the Sweet Adelines and felt like a star on stage and had the presence for it. As she moved around the southern states with her husband, she was successful in being competent at anything she set her mind to. She became am anesthesiologist assistant, learned to run the max unit in a dialysis center and even learned to be a respiratory therapist at the old Greenville General Hospital. When she and her husband finally settled in the Summerville area, she was credentialed to be the Chaplain for the Berkeley County Sherriff’s Dept. Wanting to be able to better counsel the officers she worked with, she decided she needed to walk in the same shoes as they did. She signed up, went to the academy and became a State Constable where she worked for 5 or 6 years before retiring. Later she decided she would try and help those in the biker community. So she bought a motorcycle, learned to ride it and off she went diving into that community whole-heatedly. She contacted a group known as BACA (Bikers Against Child Abuse) and with her husband started the Low County BACA chapter. She hated child abusers and used this avenue to help those kids as they had to go to court and battle against their abusers. Sandra was witty, spunky, and as you probably gathered not afraid to try anything. Survivors in addition to her husband Rod are: three children: Greg Bowersox (Tracy) of Beaufort, SC, Max Bowersox of Wadmalaw Island, SC and Kris Green (Jody) of Summerville, SC. She was blessed with eight grandchildren: Devan, Brendan, Carter, Mia, Jackson, Harrison, Garrett and Gage; Her sister Nancy Williams (Hank) of Amarillo, Texas. In addition to her parents, she was predeceased by her oldest grandchild Evan Bowersox. A memorial message may be written to the family by visiting our website at www.jamesadyal.com. ARRANGEMENTS BY JAMES A. DYAL FUNERAL HOME, 303 SOUTH MAIN STREET, SUMMERVILLE, SC 29483 (843)873-4040.

Sandra Demaris Bowersox, 74 of Summerville, wife of Rodney B. Bowersox, passed away on Monday August 30, 2021 at Roper Mt. Pleasant Hospital. The family will hold a celebration of life at a later date. Sandra was born on May 9, 1947 in Palestine,... View Obituary & Service Information

The family of Sandra Demaris Bowersox created this Life Tributes page to make it easy to share your memories.

Sandra Demaris Bowersox, 74 of Summerville, wife of Rodney B....

Send flowers to the Bowersox family.