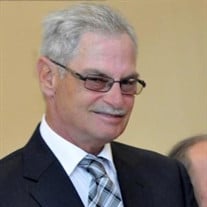 Thomas Farrell, age 71, of Summerville, South Carolina died in Summerville Medical Center on September 11, 2021. He endured multiple treatments for lung cancer in the months leading up to his death. Family and friends kept him in good company and diligently attended to his needs, in his final months. He was born in New Haven, Connecticut on August 4, 1950 into the home of the late Frank Farrell and Clara Breson Farrell. He was predeceased by a sister, Patricia Simeoli, and four brothers Francis, Gordon, Scott and Gene Farrell. He worked as a maintenance technician at Saint Raphael's Hospital in New Haven, Connecticut until his retirement.  He was the beloved father of one son, Vincent A. Cretella of Summerville, and three daughters Sheena C. Tenney, wife of John W. Tenney of Gainesville Florida, Monique J. Cretella of Summerville, and Felicia M. Cretella of Aiken. He was the adoring grandfather of two grandsons DeShawn A. Rivers and Mark J. Tenney. He was joyfully committed to riding his youngest grandson Mark on the lawn mower and enjoyed hours laughing at funny videos with his oldest grandson, DeShawn. He was an uncle to numerous nieces and nephews with remarkable relationships to Mark (Josephine) Simeoli, Frank J. Farrell, and Kaitlynn M. Farrell all of Connecticut. Other beloved surviving loved ones include J David McClure and Marion R. Cretella of Summerville, their son David J McClure and family of Ladson, and sister-in-law Susan Cifarelli Farrell of Connecticut. He was a loving caregiver to family dogs throughout his lifetime including King, Tipsy, Chica, and Jäger. Memories of him will be cherished by many. His children have found comfort that he is free of physical deterioration and comfortable in the loving arms of our Holy Father. They will conduct a celebration of his life and honor his death at a date to be determined, in the not immediate future. Friends and loved ones will be welcomed to join, closer to that date. Cards and letters will be received at PO Box 359006 Gainesville, FL 32635 A memorial message may be written to the family by visiting our website at www.jamesadyal.com. ARRANGEMENTS BY JAMES A. DYAL FUNERAL HOME, 303 SOUTH MAIN STREET, SUMMERVILLE, SC 29483 (843)873-4040.

Thomas Farrell, age 71, of Summerville, South Carolina died in Summerville Medical Center on September 11, 2021. He endured multiple treatments for lung cancer in the months leading up to his death. Family and friends kept him in good company... View Obituary & Service Information

The family of Thomas Farrell created this Life Tributes page to make it easy to share your memories.

Send flowers to the Farrell family.