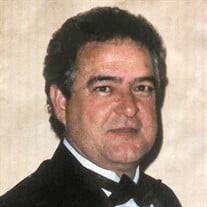 Thomas Lamar Cook, 72, of Cross, SC, husband of Ann Cook, went to be with the Lord on Friday, October 23, 2020. Mr. Cook is survived by his wife of 53 years, Annie R. Cook; two sons: Tony Cook (Michelle) and Chad Cook (Rebekah), eight grandchildren: Hannah Thompson (Bryan), Abigail Cook, Aerie Elle Cook, Fischer Cook, Summer Legette, Grace Cook, Tanner Cook and Wyatt Cook; two great grandchildren: Decker and Brooks Thompson; his mother: Adline Tanner and two brothers: Mack Cook (Phyllis) and Tommy Cook (Susan); three sisters: Adelene Richardson, Rona Stevens (Cecil) and Janet Linder. He was predeceased by his father: Thomas Henry Cook and stepfather: Ronnell Tanner. Lamar married his high school sweetheart, Ann, in 1967, where they began their journey of life at ages 17 and 18. Lamar honorably served his country in the US Airforce then after his service Lamar and Ann raised their two sons. Lamar owned and operated several car dealerships. He was President of the National Independent Automobile Dealers Association and his leadership and willfulness led him into NIADA’s Hall of Fame. Lamar was a devout Christian and an active member at Oakley Road Ministries. All who have met Lamar described him as selfless, hardworking, and a loving man who put his family above all. He often shared his passion for fishing on Lake Moultrie and hunting with his sons, grandchildren, and great grandchildren. Family and friends and others whose lives Lamar touched are invited to attend a visitation on Tuesday, October 27, 2020 from 1 to 2 o’clock at Oakley Road Ministries, 109 Oakley Road, Moncks Corner followed by his 2 o’clock funeral service at the church. Burial will be in Dorchester Memory Gardens, 11000 Dorchester Road, Summerville following the funeral. A memorial message may be written to the family by visiting our website at www.jamesadyal.com. ARRANGEMENTS BY JAMES A. DYAL FUNERAL HOME, 303 SOUTH MAIN STREET, SUMMERVILLE, SC 29483 (843)873-4040.

The family of Thomas Lamar Cook created this Life Tributes page to make it easy to share your memories.

Send flowers to the Cook family.