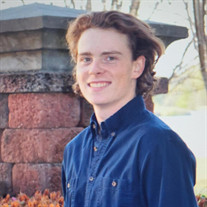 Triston Knight Sekula passed away Wednesday, January 26, 2022 at the age of 23. Triston was born January 18, 1999, at East Cooper Hospital in Mt. Pleasant, SC. He was the youngest of three sons born to Bill and Cherelle Sekula. Triston was raised in Ridgeville and grew up fishing, playing ball and climbing trees with his brothers, Parker and Peyton. He was a 2017 graduate of Ridge Christian Academy where he excelled in sports and established lifelong friendships. Triston lettered in football, baseball, basketball, and track at RCA. He also played Lacrosse with the independent Lacrosse league, The Charleston Tribe. Coach Peter Collins led them to the 2014 State Championship, which they won. In addition to sports, he loved hiking, photography and attending car shows with his friends. Triston’s greatest passion was, by far, his music. He loved writing music, going to the studio and recording his songs. He was the lead singer of his band, and loved his bandmates. He was never more in his zone than when he had a mic in his hand, singing with his band. He had so many talents and interest that brought into his life so many friends. He had such a genuine heart and generosity. He entered a room and induced smiles, he didn’t have to say a word – his smile was all it took. He was magical and so very special. He will be forever a loss here on earth yet, a great addition to heaven. In addition to his parents and brothers, he is survived by his is maternal Grandparents, “Nanny”- Brenda Knight and his Grandfather - Victor Gardner (Donna). He also leaves behind numerous Aunts, Uncles and cousins. He was especially close to his cousin, considered by Triston as a brother, Hunter Gardner. He is proceeded in death by his paternal grandparents Joe and Catherine Sekula. Visitation will be held Saturday, February 5th, 2022, at James A. Dyal Funeral Home from 12:00 p.m. – 2:00 p.m. with the Memorial service at 2:00 p.m., in the Dyal Chapel. A memorial message may be written to the family by visiting our website at www.jamesadyal.com. ARRANGEMENTS BY JAMES A. DYAL FUNERAL HOME, 303 SOUTH MAIN STREET, SUMMERVILLE, SC 29483 (843)873-4040.

Triston Knight Sekula passed away Wednesday, January 26, 2022 at the age of 23. Triston was born January 18, 1999, at East Cooper Hospital in Mt. Pleasant, SC. He was the youngest of three sons born to Bill and Cherelle Sekula. Triston was... View Obituary & Service Information

The family of Triston Knight Sekula created this Life Tributes page to make it easy to share your memories.

Send flowers to the Sekula family.