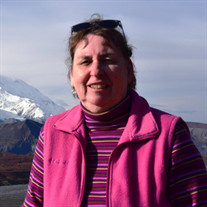 Virginia Mary Reilly, 69, of Summerville, SC died September 2, 2021 in Seward, Alaska, while on a vacation with her husband, son, and daughter. Ginger was born in Elizabeth, New Jersey on April 9, 1952, the daughter of Walter and Frances Reilly. She grew up in nearby Linden, NJ and graduated from Linden High School. Ginger graduated from Rutgers University in 1974 with a Bachelor’s degree in Forestry. She went on to receive a Masters of Forestry degree from Yale University in 1976. Ginger began her professional career in Texas with Kirby Forest Industries. She moved to Summerville in 1979, where she joined Westvaco, met and married her husband, and raised her family. Ginger retired from Westvaco after 27 years of service. Her career at Westvaco included a number of different roles, including maintenance manager, technical forester, and minerals manager. She was most proud of her service as district forester, guiding over a dozen people and 90,000 acres of land through the worst fire season the company ever experienced, as well as the aftermath of Hurricane Hugo. Upon retirement, Ginger turned her energy towards her many passions. She was an active Master Gardener, volunteering at Magnolia Plantation. Ginger also served as a SC Long-Term Care Ombudsman and served in several roles with local/community schools. She was very active in the Society of American Foresters at local, state, and regional levels, serving in a number of offices. Those who knew Ginger knew her as a caring friend, a loving wife and beloved mother, a lover of plants and animals, and someone who would do anything to help a person in need. She is survived by John Thurmes, her husband of 36 years; son Zachary Thurmes, of Raleigh, NC; daughter Rachel Thurmes of Wasilla, AK, and sister Joan Klapka and her husband Robert. Visitation will be held at James A Dyal Funeral home in Summerville on September 16 from 6 to 8 pm, and a Funeral Mass will be held at St. John the Beloved Catholic Church in Summerville at 1 pm on September 17. In lieu of flowers, memorial contributions may be made to the Parkinson’s Foundation at https://parkinsons.org, or to a charity of your choice. A memorial message may be written to the family by visiting our website at www.jamesadyal.com. ARRANGEMENTS BY JAMES A. DYAL FUNERAL HOME, 303 SOUTH MAIN STREET, SUMMERVILLE, SC 29483 (843)873-4040.

Virginia Mary Reilly, 69, of Summerville, SC died September 2, 2021 in Seward, Alaska, while on a vacation with her husband, son, and daughter. Ginger was born in Elizabeth, New Jersey on April 9, 1952, the daughter of Walter and Frances Reilly.... View Obituary & Service Information

The family of Virginia "Ginger" Mary Reilly created this Life Tributes page to make it easy to share your memories.

Send flowers to the Reilly family.