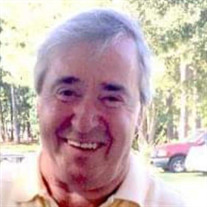 It is with heartfelt sadness that the family of William “Bill” Jasper Bodiford, Sr. regrets to announce he has entered into eternal rest on July 18, 2021. He was surrounded by his wife of 58 years along with his children and grandchildren by his side at his home in Goose Creek, SC. Family and friends may call James A. Dyal Funeral Home, 303 South Main Street, Summerville, SC on July 22, 2021 from 6:00pm until 8:00pm. Funeral services will be held on Friday, July 23, 2021 at 2:00pm James A. Dyal Funeral Home. Burial will follow at Dorchester Memorial Gardens, 11000 Dorchester Road, Summerville, SC. We will have a Celebration of Life following the burial held at Miler Country Club, 400 Country Club Blvd, Summerville, SC. In lieu of flowers memorials may be made to Coastal Center Parents and Guardians, 9995 Jameson Road, Summerville, SC 29485 or Trio United Methodist Church, 976 Rowell Road, Salters, SC 29590. Bill was born on August 1, 1943 in Blakely SC. He was the son of the late Siril M. Bodiford, Sr. and late Gertice Cooper Bodiford. Bill ran SM Bodiford and Sons Logging that was started by his father “Siril M. Bodiford, Sr.” in 1942 and continues today through his son, Billy Bodiford. The logging company is a third generation company featured in “Southern Loggin’ Times” July 2012 edition. He was a logging legend to his family and friends and enjoyed working in the woods along side of his brother (Ricky Bodiford) and son (Billy Bodiford). At an early age of 13 years old Bill was working in the woods with his father in 1956. Back in those days there was no equipment, everything was done by hand - from cutting to loading. Just before turning 14 years old he drove a log truck across the old Grace Memorial Bridge in a F600 Ford, with no drivers license. The things he cherished most in life were his love for God and his family. He was a member of the Goose Creek Masonic Lodge 401, Scottish Rites, Royal Order of Jesters Court No. 113, Temple Staff and the Omar Shrine Temple 32nd degree. He was an avid Nascar fan and a loyal Carolina Gamecock fan - win or lose. Bill was also a diehard FORD man through and through. Bill was a very humble, loving, kind and generous man who loved to do for others. He was a true and loyal friend - if anyone needed anything and he had it, it was theirs. He was known for his famous BBQ - he loved to cook his pit BBQ to share with his family and friends. Bill was so devoted to making sure he had enough to go around staying up all night cooking 40+ Boston Butts and racks of ribs so that family and friends could pick up Christmas morning and New Years Day - this tradition went on for many years. Bill had a love for music and dancing (the twist or shagging), if there was music he was moving to the beat. He loved devoting his time and energy to helping others who were in need, always giving never taking. Bill along with 5 other friends (Wendell Huggins, Glenn Huggins, Doug Brown, Bob Young and Chuck Murray) built the Gazebo in the Memorial Garden at the Coastal Center in Ladson, SC donating their time and material where his daughter Becky resided for 38 years. He was an avid supporter of the Coastal Center raising money and participating in the annual golf tournaments and Christmas parade as well as furnishing a trailer for the float and pulling the float. Affectionately known to his grandchildren and great grandchildren as the one and ONLY “Papa”. He instilled kindness and generosity in everyone of them. Papa was their “Main Man”. He also had another talent in being what we called the human calculator. There was not any mathematical equation he could not figure out in his head - simply blew our minds. Bill is survived by his wife of 58 years, Linda Bodiford (Groce) of Goose Creek; children, Billy Bodiford (Lisa) of Goose Creek, Fran Bodiford of Goose Creek; 4 Grandchildren, Trae Williams (Sara), Brandon Bodiford (Selena), Ashlyn Jones (Zachary) and Brooke Bodiford (Matthew); 10 Great Grandchildren, Braden Williams, Ben Williams, Tripp Steverson, Ayden Jones, Paisley Mae Bodiford, Preston Hager, Walker Williams, Lakelynn Jones, Harper Bodiford and Landon Jasper Jones; Sisters, Jerri McDonald, Bobbi Carr (Cecil), Joann Phipps (Bobby); Brothers, Siril (Ricky) M Bodiford (Nancy) and Wayne Bodiford (Cheryl). He was preceded in death by his precious angel (daughter) Rebecca “Becky” Michelle Bodiford, Father, Siril M Bodiford, Sr., Mother, Gertice Cooper Bodiford; Grandmothers, Rebecca Jane Cooper and Mary Elizabeth McGee Bodiford; Grandfathers, Willie Cooper and William Jasper Bodiford. ARRANGEMENTS BY JAMES A. DYAL FUNERAL HOME, 303 SOUTH MAIN STREET, SUMMERVILLE, SC 29483 (843)873-4040.

It is with heartfelt sadness that the family of William &#8220;Bill&#8221; Jasper Bodiford, Sr. regrets to announce he has entered into eternal rest on July 18, 2021. He was surrounded by his wife of 58 years along with his children and grandchildren... View Obituary & Service Information

The family of William "Bill" Jasper Bodiford Sr created this Life Tributes page to make it easy to share your memories.

It is with heartfelt sadness that the family of William “Bill”...

Send flowers to the Bodiford family.